better when we're together

Kazunari goes with Itaru to a con.

Sorry that there aren't any visuals for the pics I describe but I hope you enjoy nonetheless! x)

(See the end of the work for more notes.)

Kazunari's ears perk up. He's removing his rubber shoes at the dormitory entrance when he hears voices, one distinctly sounding like his boyfriend's.

A dismissive huff follows. "I haggle budgets with the lousy yakuza every month. You’re not gonna win against me even if you try."

Coming into view, Itaru, still in his suit, shrugs. "Worth a shot."

Opposite Itaru, Yuki studies some designs on paper, his back facing Kazunari. The sheet he holds shows a character in black armor accented by cobalt blue and adorned with a flame-colored cape. Wow, so dope?? Kinda resembles Itaru’s favorite in that one game…'Ice Emblem: Sleeping?' was it?

"The quote is tentative but I need your confirmation by the end of the week. I’ll shop for it with the Spring Troupe’s clothes."

Both eyes turn to him. Yuki tilts his head in acknowledgement, but Itaru returns Kazunari's gaze. In the yellow artificial light of the entrance, Itaru's expression softens, looking younger despite his eyes wrinkling as he smiles. Kazunari clenches his fist, even though all he really wants to do is clutch his heart.

Holy – unfair! How does his boyfriend have the prettiest eyes? It's like marveling at the fireworks in the summer sky, his heart beating faster with each explosion. Warmth blooms in his chest and rushes to his face. He can never tire of staring at someone who looks at him the same way. His mouth twitches at the thought of how they've had this for more than a year already.

The trance is broken by the click of Yuki's tongue. "Right in front of me, really? You guys are gross."

The peacock in him wishes to preen with how their affection is perceived by someone else, but instead he laughs it off. "I didn't even say anything!"

"That makes it even worse. I'm leaving." Yuki fake-gags before walking away.

Kazunari bumps shoulders with Itaru. "Is Yukki designing you a costume or something?"

Veludo Anime Convention, or VeluCon, happens annually and fills the town's streets with hoards of people; a Mariner Sun sweating from the heat right next to a large mecha or an idol character conversing with a variety of eyepatched characters. In the past, Kazunari had taken pictures with anyone willing when he passed by. He's never gone into the convention grounds themselves but has always wanted to.

To his knowledge, Itaru has never gone before either.

Itaru picks up on his silence. "Some of my best girls' VAs are guesting; cosplay pre-reg guarantees signed merch. Can't miss out on that."

Whenever there's a release absolutely catered to him, Itaru cannot help but rock on the balls of his feet, giggles barely escaping his throat. It's why the most he does at the office is check messages and use up SP. It's the little things that can throw off his perfected work facade. But, honestly, it's what Kazunari prefers; his boyfriend's passion unleashed. Not that he doesn't understand wanting to hide your vulnerabilities from others. He knows it well enough.

"Good or bad?" Itaru replies without missing a beat in spite of his focus shifting towards the loading screen on his phone.

"Listen," Kazunari pauses for emphasis. "Why don't I cosplay with you?"

Itaru turns his head so fast that Kazunari takes a step back.

Ah, that slight falter in Itaru's voice when he gets riled up. Kazunari grins.

"Matchy-matchy with whatever yours is!" He grabs onto Itaru's arm and leans in. "We can do your OTP, brOTP...whatever you want! Bee-tee-dubs, I know it’ll be expensive, but mayhaps Yukki will be willing if I join the production…"

The game is swiped off his phone screen and Itaru clicks on his browser. Scrolling through Goodle images, he says, "I'll ask Yuki to change the cos to one of the simpler ones so that it’ll be cheaper. That way, I can help pay for yours."

"Why are you the one asking? You're the one who offered."

His face splits into a smile. Without any warning, he pulls Itaru into a bear hug. "We'll make it the Ultimate Bonding Experience!"

To be woken up by Itaru during the weekend is either a sign of the world ending or of his commitment to a cause. Fortunately, it's not the former and Kazunari can live another day sighing wistfully about how cute his boyfriend is. Unfortunately, the latter reveals the horrific lines they have to trudge through wearing his long coat that super isn't made to be worn under the sweltering sun.

To be fair, they are reasonably near the entrance, so getting here early has its advantages. It’s just that, he’s still knackered since they only just finished the clothes last night. His character is a sorcerer of sorts in a werewolf costume. No idea how it works in canon, but Itaru has given him the thumbs up of approval, so that counts for something. On the other hand, even though his boyfriend has bunny ears on his head, there's no doubt he's a prince. His back is straight as his hands rest on the hilt of a standing sword. The bright colors don't dampen the regal aura at all.

And it definitely attracts not-so-hushed whispers from other con-goers who clearly want to take pictures with them. Itaru might have to play the part of a prince (supposedly very friendly so why Itarun is giving off Lancy vibes instead, Kazunari does not know), but Kazunari has been given permission to take liberties.

If they’re here to have fun, might as well make the most of it, right?

"Hey! Your costumes are sick! Mind if Easter Chro-Chro and I here take a selfie with y'all?" he calls out to some onlookers. They're also in costume, and dang! That must be some hand-dyed fabric, and what intricate embroidery! He has to take lots of pictures for inspiration, and Yuki would definitely want some as well.

It goes like that for the next hour as they wait for the gates to open. Already, Kazunari has made new friends to follow on the ‘Blam ranging from professional cooks to woodworking experts. Wicked. Additionally, Itaru cannot hide how happy he is from the interactions and it makes Kazunari beam. He suggests they commission more costumes and do photoshoots at home to utilize Omi’s rad photography skills; Itaru turns it down, saying Yuki will instantly sap his savings that way.

"Kyu-chan, I found the stalls you wanted to visit, and I'll mark them on your map."

The three teens that tagged along with them are practically vibrating with excitement. Muku had been meticulously keeping track of which stalls to visit ever since Kazunari told him their plans. He immediately jumped on board, promising to stay out of the couple’s way and ended up recruiting Taichi and Kumon to join him (not that they wouldn’t have come on their own accord, Kumon is wearing Itaru’s outfit from Clockwork Heartbeat – any stain or tear is an instant death courtesy of Yuki, but he decided to push through anyway).

Booths line every inch of the venue. Tables are stacked with merchandise and fanart from one end of each table to the other. Shops are manned by cosplayers and people simply in their hoodies alike. How on Earth does Itaru plan to get through all of them?!

Amazingly, Kazunari sees his boyfriend speed through the stores faster than he's ever seen him move before. Maybe if Tasuku had prizes at the end of each run, Itaru would join him. After the mere first hour, half of Itaru's backpack is already full.

"Can't reach full capacity yet; the main quest has yet to be fulfilled," Itaru remarks on their way to the Meet & Greet venue.

Mankai has had its fair share of its own fan meetings, but these pros are in a league of their own. While they've also sold merchandise (mostly of their play cast), the quantity and quality cannot compare. Several huge posters of the characters the actresses voice, along with full body figurines, nendoroids, and even pop albums, are arranged neatly onto rows of tables in the waiting area, already surrounded by antsy fans..

"It's like they're CoralBob." Kazunari turns towards Itaru. His boyfriend then makes a fist and shakes it in the air. "Just take my money!!!"

Kazunari can't help but snort out a laugh and Itaru joins him.

When he catches his breath, he points to the items with his sword prop and declares, "Sidequest: Get Taruchi some more merch."


After the Meet & Greet, Itaru silently shakes, hugging his bag that threatens to burst. He puts his hands together, seemingly to thank the gacha gods for the experience. What a cutie! Click. 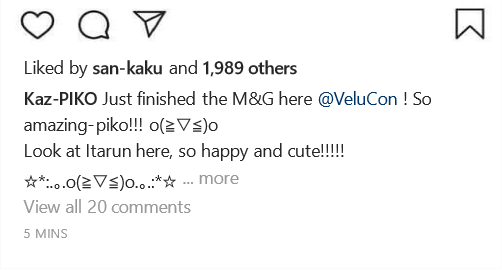 The rest of the day passes like a whirlwind, jam-packed with picture request after picture request. Itaru's love for the stage had been a gradual thing - from initial disinterest to genuine desire to play his role well. He does indulge theatre go-ers when they wait by the stage door, but he's easily conked out right after. Here though, he looks energized as he sees the excitement in others and hears them complimenting his costume. Gosh, Itaru is positively glowing and Kazunari can watch him like this forever.

Soon enough, they meet up with the teens and head back home. Even though the trio are talking loudly ahead of them, he and Itaru are silent as they swing their hands together and walk at a much slower pace.

"Thanks for coming with me." To anyone else, gratitude wouldn't be unusual, expected even. But coming from Itaru, Kazunari hears all the words unsaid.

Thank you for taking the time to experience the things I like.

Thank you for putting in all the energy just to join me.

Thank you for being with me.

He grips Itaru's hand tighter and puts on a smile as the love in his heart swells throughout his entire being. "For you, always." 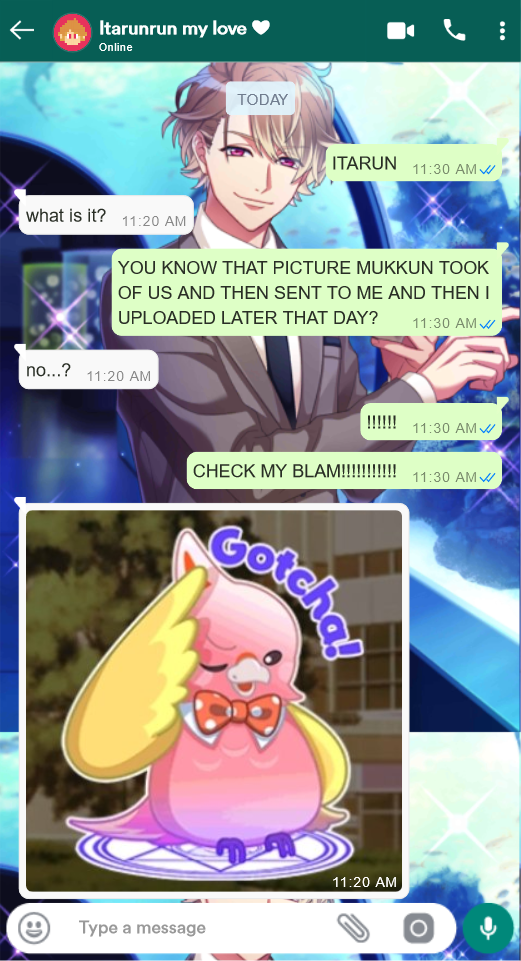 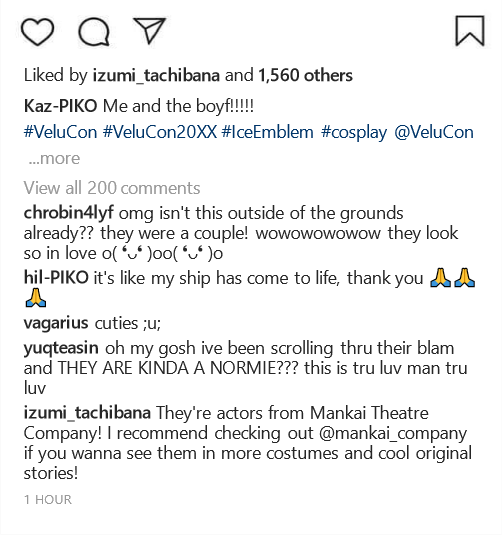 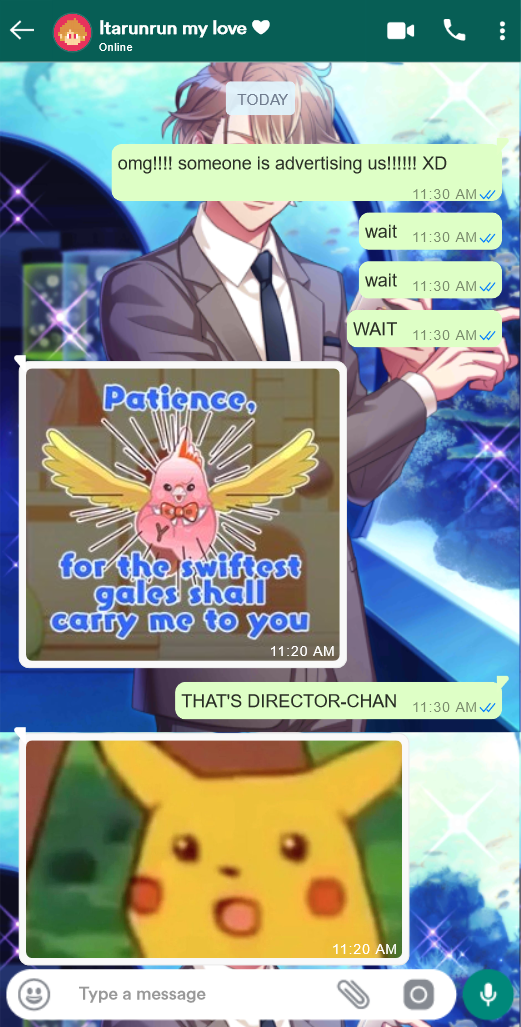 taichi: kazu-kun, some of us are single T_T
kazu: it's okii taicchan, all in good time ;D

Series this work belongs to: